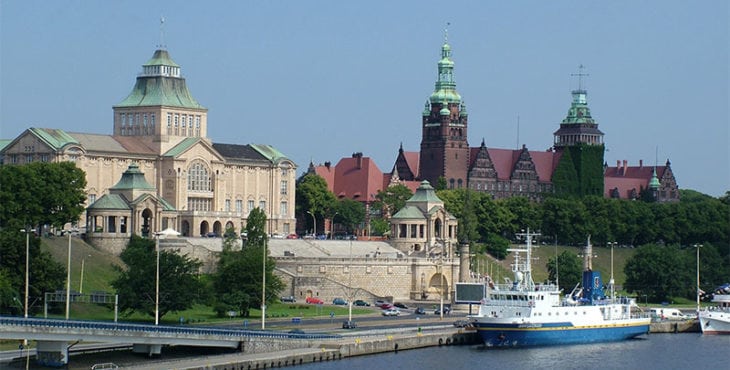 Things to do and see in Szczecin

Szczecin is one of those cities that you don’t hear too much about. It’s not somewhere in the spotlight, but that doesn’t mean it’s not worth visiting. Szczecin has a long and dramatic history which can be seen while wandering through the city. It’s a long way from most of the parts of Poland, but if you ever get the opportunity to visit Szczecin don’t miss it.

Not everyone knows that Szczecin hides an impressive complex of underground tunnels and bunkers which is a reminder of World War battles. It is still unknown how vast the underground city is, but right now only one part is available for viewing. It consists of 2 thematic tours: World War II and Cold War. They are arranged to give you a disturbing feeling of those hard times. Remember to wear some warmer clothes as it is a little bit colder than outside. Grab a helmet and explore history!

Address: ul. Zegadłowicza
Opening hours: during summer: 11am – 20pm, Autumn, Winter: usually only on demand
Length of visiting: depending on your skills and fitness
Price: depends on the tour, from 20 to 30PLN

If you’re not afraid of heights this is definitely for you. Tarzania Park offers fit daredevils some climbing and rope slides a few meters above ground level. Sounds scary? Don’t worry, all the tours (4 for your choice: green, blue, red and Tirol) are completely safe and you’ll be under the care of professional instructors. In fact, even a small child is able to go through it.

Opening hours: from mid-April until the end of November (hours: mornings until hour before sunset)
Length of visiting: varies from 1 hour to one day
Price: 35 PLN for a whole day of renting cheapest kayak (weekends), 30 PLN (weekdays)

Canoe along canals of the Odra river

One of the strongest advantages of Szczecin is water all around the city. The Odra river and Dąbskie lake give all the citizens and tourists the possibility to explore wildlife and water environments within a few kilometres of the city centre. The easiest way to taste it is to rent kayaks, preferably with a group of friends, and just let yourself flow with the current. The area to explore is huge so you can choose to go to Dąbskie lake and see the concrete shipwreck of “Urlich Finsterwalde”, built in 1941 and destroyed in 1945 by bombings and later left in the northern part of the lake. Or, if you have less time, visit Szczecin city centre and the industrial atmosphere of the harbour.

Length of visiting: depends of length of your trip, varies from 1 hour to one day

So, are you tired of big city life, chaos, people running with insanity in their eyes? It’s time to pack your backpack, wear comfortable boots and trek at least a little into the wild. The Bukowe Hills and Forest offer total retreat away from it all. While wandering around the trails you can bump into some ruins of buildings and bridges built many years ago by Germans, also if you have luck you can meet boars and deer (don’t go too close, obviously). In the middle of the backwoods, there is also a hidden treasure: Emerald Lake. The name comes from the green colour of the water, which is an effect of the chalk mine that existed there years ago.

Take a swim at the Floating Arena

Floating Arena (Olympic Pool) was an arena for the European Championship in 2010. Now it is serving citizens’ desire for some serious swimming exercises. The Pool is open for amateurs and pros so why not start a day with a few lengths of the pool? If you don’t want to swim you can go along and watch one of the many events. This could be a good occasion to see non-mainstream sports like water polo.

If you ask any Pole about Gubalowka, without any doubt you would be directed to Zakopane. But, surprisingly, Szczecin also has a place with the same name. It’s a ski-run where winter sports maniacs can get lost in their passion. Ski –run includes 2 routes(both about 300m long) and it’s opened only during winter. Apart from ski-run you can also go crazy on the ice rink or go to the snow park.

A castle straight from medieval times, it was the seat of Pomeranian Dukes. It has been rebuilt many times, but we think it’s pure miracle it survived the bombings of World War II. Obviously, the Castle had to be repaired, but now it impressively looks down on townhouses and the river. It’s a place of many exhibitions and city events especially those connected with medieval and ancient times.

One of the most recognisable places in Szczecin, if you buy a postcard from Szczecin it’s very probable it’ll have Waly Chrobrego as a picture. Located next to Odra river it is an apple of Szczecin inhabitants’ eye. The whole complex consists of terraces on different heights that overlook Jana z Kolna street, Odra River and Trasa Zamkowa – the main road entering the city centre. A newly renovated fountain attracts attention with colour changing lights and clean sandstone walls.

St. Jacob Apostle Cathedral is the second highest building in the city – with a height of over 110 meters it peaks high above city roofs. Inside, the overall view is rather ascetic, but it doesn’t apply to the historic organs. The range of sounds it’s capable of making is simply astonishing. The observation deck on the top is open for everyone and the very good news is that there’re two elevators installed so you don’t have to climb up thousands of steps.

The National Museum has locations all around the city, but the main building is part of the Waly Chrobrego complex. It’s a place of many exhibitions, some permanent (for example an African village expo) and others are time restricted. Also, a very big advantage of the Museum is the observation deck on the top, yet another one in Szczecin. This one is a little bit lower than the Cathedral deck but has one big advantage: its open balcony in the fresh air. There’s no glass between you and the beautiful view.

Museum of Technology and Communication

Probably the newest museum in the city, it is found in a place of old, unused tram depot. Now it’s not only a place for trams but also many old school cars, buses, bikes, radios and other machines you wouldn’t even think of. For tram fans always dreaming of riding a tram, the Museum also organized a professional simulator. Every brave person sits in a chair of the tram driver and can really feel like they are cruising through the city.

This is one of the biggest open-air amphitheaters in Poland with a capacity of 4,500 people. Usually, when spring comes, the season for events in the Summer Theatre begins. The great thing is that it’s open every day, even when no event is scheduled. People just sit and relax, look up at the sky and sunbathe. It’s situated in magical surroundings – next to a big pond named Rusalka, in between the trees of Kasprowicza Park.

Chilling out in Szczecin

Address: Plac Sienny
Opening hours: 24/7
Length of visiting: depends on your spot
Price: depends on what you order

Drink and eat on the Market Square

During II World War Szczecin (or as it was called then Stettin) was severely bombed during air raids. Many parts of the city were completely destroyed and never rebuild in the same form. Thankfully one of the oldest parts of Szczecin, Rynek Sienny wasn’t. The Market Square gets the most lively after sunset when locals can really enjoy the nightlife. Before getting into eating and drinking you can enjoy the Old Town Hall and the National Museum in it.

Take a rest in Jasne Błonia

Jasne Blonia, located next to the Town Hall, is probably the favourite place to spend free time. On sunny and warm days the park is full of people chilling out. You can rest there from away from the buzz of the city or exercise. Jasne Blonia is a popular place for locals and visitors with many events to take in. In the park you can also find two monuments. First, one of the Pope John Paul II and second, called by inhabitants ‘three eagles’, in memory of three generations of Polish citizens that initiated and continued converting Szczecin into the Polish city.

Fountain next to Garrison Church

This place is relatively new to public space but has already gained a lot of appreciation from Szczecin’s citizens. While the fountain is not the largest, it is beautiful, especially around sunset. At night is lit up by a rainbow of colours. In the middle of the fountain, there is a small walkway over the pool so people can get across it.

Chill out at Głębokie Lake

Despite not having coastal beaches Szczecin has inland beaches to relax on. One of them is an area around Głębokie Lake. It’s not far from the city but still has the feel of the countryside. It is a great place to sunbathe or swim. Local people like to make bonfires there as it has special places prepared for it. Of course, you can as well make your own bonfire and cook some good sausage.

Usually, graveyards are associated with sadness and aren’t visited very often. In Szczecin’s case, it’s different because Central Cemetery is 3rd biggest one in Europe. And this may sound weird but it’s great for a walk especially in the autumn when the leaves are yellowish and falling from the trees. The cemetery offers thematic walks following the footsteps of pre-war citizens of Szczecin. The city is emotionally connected with the sea so one of the most important and worth seeing is the one in the memory of those who didn’t come back from the sea. 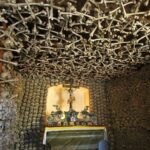 11 places in Poland you might have never heard about 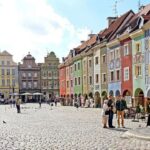 Things to do and see in Poznan

Things to do and see in Torun

Things to do and see in Poznan