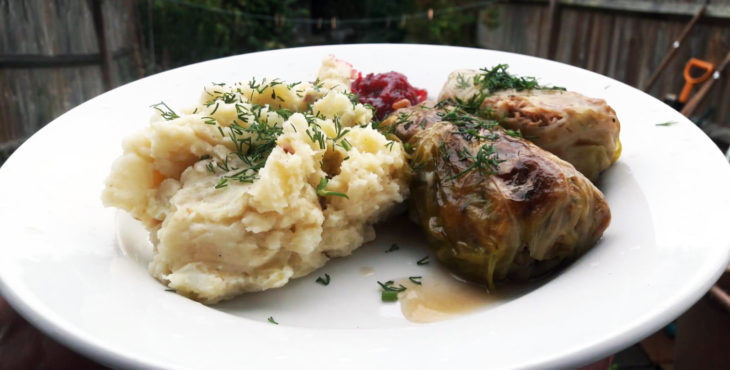 Gołąbek (plural gołąbki) is one of the Polish dishes that appear in the same sentence as pierogi, schabowy (Polish schnitzel) and barszcz (beetroot soup), that is to say, the king of Polish tables. Polish people appreciate this dish so much that it is taken for granted that gołąbki will be included in Poland’s top 10 favourite foods list. Funny enough this dish is far from being uniquely Polish and variations of it can be found in many different countries, but we will get to that later.

Gołąbki are simply cabbage rolls made of mince meat (pork or mix of beef and pork) mixed with rice, onion and spices wrapped in cabbage leaves (almost any cabbage type can be used) and slow cooked to perfection. The recipe changes slightly depending on the region and season (in winter gołąbki will be served on a bed of rich potato mash and covered in a creamy tomato sauce, opposite to the spring version that takes advantage of young vegetables and fresh herbs like dill). It’s safe to say that every family has its own way of preparing this dish and one should never argue who’s gołąbki are better as far as they don’t want to lose their friends.

Where did gołąbki get their name from?

Firstly, you should know that the word ‘gołąbek’ has a double meaning in Polish. It is, of course, our wonderful dish but also a dove (a type of bird). This may confuse a lot of people, including Poles who often question this weird name choice. There is, however, a method to this madness because the word ‘gołąbek’ came to Poland in the 19th century from Ukraine where a very sophisticated dish was served during aristocratic feasts and parties called ‘hołubci’. ‘Hołubci’ consisted of a dove stuffed with other wonderful things and wrapped in cabbage leaves. The idea of hołubci came to Poland and got not only translated but also adopted by poor masses. The dove got replaced with much cheaper mince meat and rice (the poorer the cook, the more rice would be added to the dish) and only the original cabbage wrap was preserved.

The short answer is no. Very similar dishes are popular in Sweden, Croatia, Germany, Russia, Hungary, Greece, Israel and Turkey. The difference is always down to the type of meat and cabbage used to make the dish and not less important, the sauce that is served with the dish. For example in Jewish cuisine, meatballs are wrapped in cabbage leaves and served with sweet and sour tomato sauce called holiszkes. In Croatia, they use pickled cabbage and their sarma is served with creme fraiche (thick cream) instead of sauce. In Germany, an almost identical dish is served with a dark brown sauce and it’s called kohlrouladen. And in Greece, everyone loves dolmadakia – lamb mince meat wrapped in wine leaves.

Now, when you know the complicated history of gołąbki it’s time that you make your own. Here is a traditional and hundred times tested recipe.

Start with cooking the rice al dente and peeling and chopping the onion. Heat up oil in the pan and fry the onion on a slow heat until golden. Put it aside and let it cool. Do the same with the rice.

In a big bowl, mix the meat, rice, fried onion, salt and pepper. Add the breadcrumbs, just enough to make sure everything sticks together.

Now the hardest part: cut the middle of the cabbage (the core that keeps the leaves together). Boil water in a big pot (as big as you can find, 5 litters should be enough for a middle size cabbage). Put the cabbage in the hot water and cook for 10 minutes, then turn it around and cook for few minutes more. Take it outside and let it cool. The leaves should easily fall off.

Stuff each leave with the meat and rice: put the stuffing on one side and roll the top and bottom sides to the middle and then roll it tight to create a roll. Keep up the good work and stuff all the cabbage leaves.

Put some leftover cabbage that couldn’t be used to make the rolls at the bottom of a big pot (for example the one you used to boil the cabbage). Put each gołąbek tight next to each other, leaving as little space between them as possible. Keep creating the layers and poor the bullion evenly over it. Cover the pot and put it on a low heat. Cook it for at least 45-60 mins (if you leave them to cook for longer they will become softer). You can easily reheat them the next day and to be honest, they taste the best the next day.
Serve with mash potatoes and a few spoons of sauce created from the bullion and the meat juices. Add some fresh dill to finish it off.

The best places and restaurants to eat in Poznan 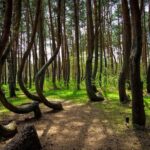